When a marriage ends, separation and divorce typically follow. In this article, we discuss the top four types of marital breakups that commonly cause high conflict divorces.

We base what we write below on our experience as California divorce attorneys.

If you want to read a real-life example of a high conflict divorce, take a look at our article on model and actor, Jaime King's divorce. 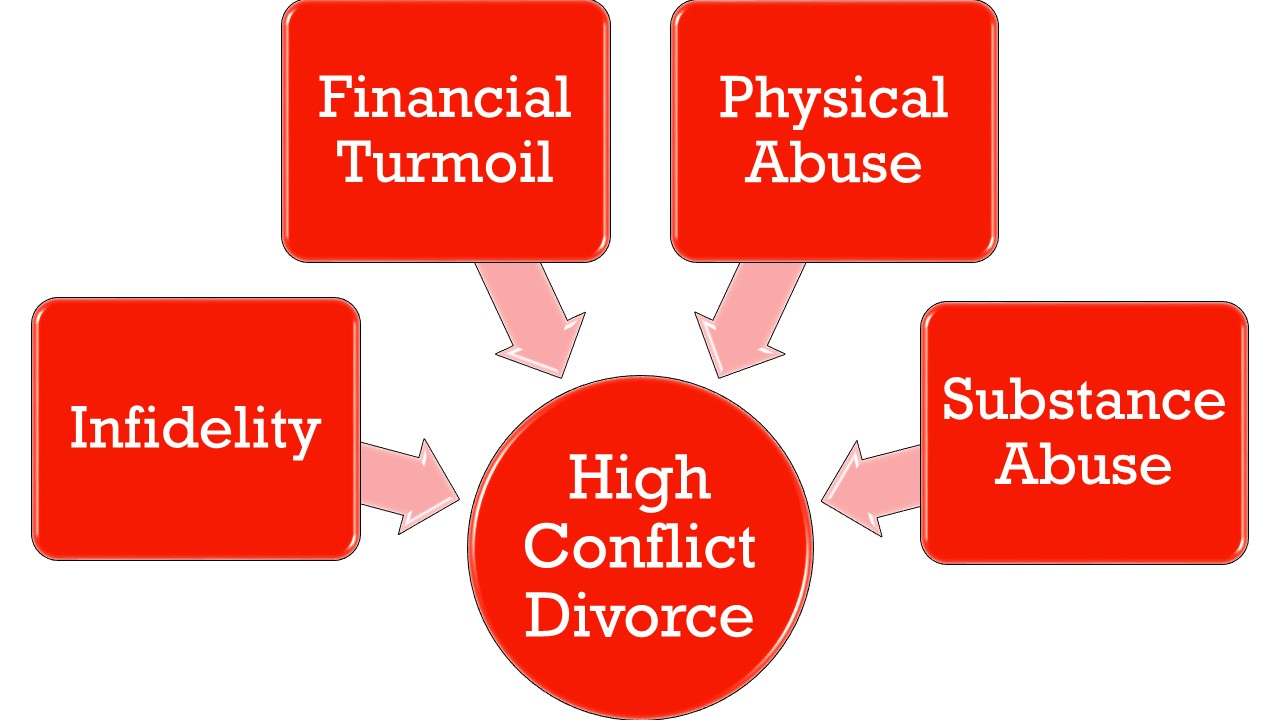 One spouse or both of them step outside of the marriage and that often leads to the marriage's end. The infidelity that most often ends a marriage is the secretive type where there is not only a breach of trust between the spouses but also a covert relationship hidden from the spouse.

You may ask, "isn't all infidelity covert?" No, that is not correct. Some spouses are open about their unhappiness in a relationship and their desire to seek out other companionship. Sometimes this is sexual. Other times, it has nothing to do with sex.

The degree of infidelity affects the divorce process.

Although California is a no-fault state, husbands and wives are still human beings. In those situations where there is serial infidelity and therefore deception and a breach of trust over many years, the other spouse may be so devastated and so distrusting, that it becomes a challenge resolve the issues in the divorce.

To reach a compromise and resolution requires some level of trust and compromise between spouses. If there is a complete breakdown in trust, expect challenges.

Read our article titled, How Does Adultery Affect Divorce?

What about "emotional infidelity?"

I have not yet seen emotional infidelity be the sole cause of separation. It usually accompanies another reason or reasons.

2. Financial hardship that reaches the level of turmoil

Another common cause for divorce is financial hardship that reaches the level turmoil. The word turmoil has different meanings to different people. Some spouses have a high pain and stress tolerance and no amount of financial struggles may cause a separation or divorce. Others have a very low threshold and even temporary financial hardships may rock the marriage. Most people are somewhere in the middle.

It's not difficult to see why a loss of financial wealth leads to a divorce. Those who married in significant part for financial security have little reason to stay in the marriage when the marriage no longer offers the same security. Those cases are the most common that lead to a divorce due to financial turmoil.

Except for those cases, we find financial turmoil rarely causes divorce. We will give you one example.

The second observation we make in our experience is financial turmoil usually does not result in a divorce unless the spouse who caused it refuses to take reasonable measures to restore some financial stability.

Life is similar to the stock market. It has its highs and lows. Regardless of those lows, good planning and long-term thinking often result in financial recovery and even additional gains.

The spouses who refuse to learn from their mistakes and continue to send the marriage and the marital estate through a downward spiral are the ones that cause a complete breakdown in the marital relationship.

A marriage, like any relationship, can only withstand a certain amount of stress before it breaks. Even those who have a high tolerance to stress cannot live in a constant state of fear and anxiety. This is true with money as it is with any other issue that affects a husband's and wife's day to day life.

Though it is not as common as the first two, physical abuse does often lead to separation and divorce. Physical abuse may be abuse of the children, one spouse, or even both spouses in those mutual abuse / combat situations.

Spouses who are the victims of physical abuse have many options available to them and one of the most important is seeking a restraining order against the abusive spouse.

A physically abused spouse can obtain a long-term restraining order against the abusing spouse. He or she can also obtain protections for the children and orders that require the spouse to pay child support and spousal support on an expedited basis.

Domestic violence restraining orders move much faster than a divorce and provide an abused spouse with rights and remedies that can place him or her in a safer situation than continuing to live with an abuser.

Many American lifestyles include alcohol consumption. As marijuana becomes more mainstream and even legalized, marijuana use may follow alcohol in that regard.

Substance abuse is different from substance use.

When we address substance abuse, we refer to overindulgence of or dependence on alcohol, legal or illegal drugs. "Legal drugs" include any drugs that a spouse lawfully obtained. That includes prescription medication.

A spouse who abuses alcohol or drugs is usually unpredictable, erratic in his or her behavior and unreasonable in his or her perspectives. Substance abuse may also lead to physical abuse, financial losses, criminal activity, and association with dangerous persons. These not only present challenges to the marital structure but to raising children within the household.

Unfortunately, at those extremes, a toxic mixture of emotions lead to high conflict breakups and an ensuing divorce. Those often include the following:

We hope you enjoyed this article

We hope you enjoyed this article on the top four types of marital breakups that cause high conflict divorces. We share with you below additional links to articles you may enjoy.

When is it time for divorce