How Do You Win a Child Custody Case in California?

How to Win a Child Custody Case in California

How do you win a child custody case in California family court?

You know what this article is about; winning a custody case. Let us first tell you what it is not about.

A good parent is one with integrity. He or she focuses on the child's best interest. There must be a child-focused reason the other parent should not share equal or close to equal parenting time with the child or children.

Here are a list of topics we cover. You can click on any of the following to skip ahead.

Let us get started. 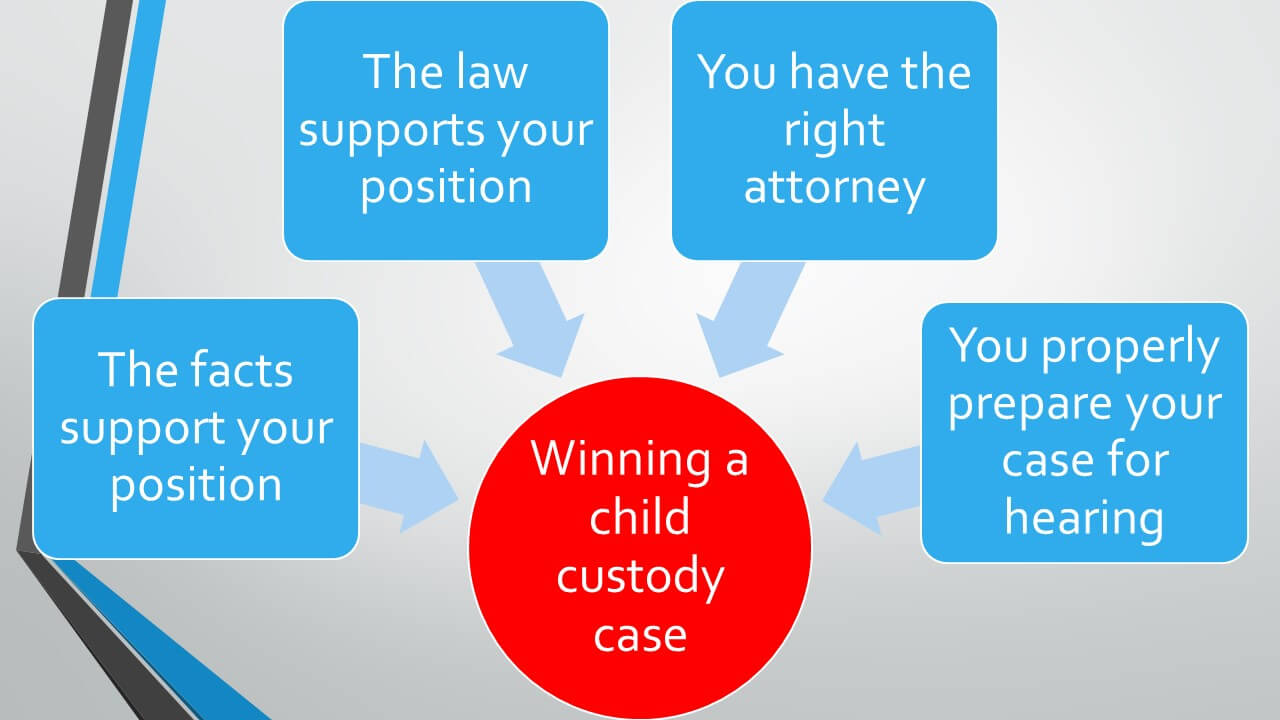 An introduction to winning a child custody case in California

What are the keys to winning any child custody case in California?

Is that all of them? No, it is not. The above are the most common.

Here are the roles the attorneys play in child custody litigation.

Family Code 3040(a) states the following:

"(a) Custody should be granted in the following order of preference according to the best interest of the child as provided in Sections 3011 and 3020:

(1) To both parents jointly pursuant to Chapter 4 (commencing with Section 3080) or to either parent. In making an order granting custody to either parent, the court shall consider, among other factors, which parent is more likely to allow the child frequent and continuing contact with the noncustodial parent, consistent with Sections 3011 and 3020, and shall not prefer a parent as custodian because of that parent's sex. The court, in its discretion, may require the parents to submit to the court a plan for the implementation of the custody order."

There is more to Family Code 3044 than what we wrote, above. The part in bold is the part we wanted to emphasize.

Parental alienation is child abuse. Anyone who states differently is either:

Keys to winning a child custody case against an alienating parent

"(a) For purposes of this act, "abuse" means any of the following:

(1) To intentionally or recklessly cause or attempt to cause bodily injury.

(3) To place a person in reasonable apprehension of imminent serious bodily injury to that person or to another.

(4) To engage in any behavior that has been or could be enjoined pursuant to Section 6320.

(b) Abuse is not limited to the actual infliction of physical injury or assault."

Family Code 3044(a) states the following:

"(a) Upon a finding by the court that a party seeking custody of a child has perpetrated domestic violence within the previous five years against the other party seeking custody of the child, or against the child or the child's siblings, or against any person in subparagraph (C) of paragraph (1) of subdivision (b) of Section 3011 with whom the party has a relationship, there is a rebuttable presumption that an award of sole or joint physical or legal custody of a child to a person who has perpetrated domestic violence is detrimental to the best interests of the child, pursuant to Sections 3011 and 3020. This presumption may only be rebutted by a preponderance of the evidence."

There is more to this code section than what we wrote, above.

Keys to winning a child custody case due to domestic violence

"(a) No parent shall be placed on supervised visitation, or be denied custody of or visitation with his or her child, and no custody or visitation rights shall be limited, solely because the parent (1) lawfully reported suspected sexual abuse of the child, (2) otherwise acted lawfully, based on a reasonable belief, to determine if his or her child was the victim of sexual abuse, or (3) sought treatment for the child from a licensed mental health professional for suspected sexual abuse.

(b) The court may order supervised visitation or limit a parent's custody or visitation if the court finds substantial evidence that the parent, with the intent to interfere with the other parent's lawful contact with the child, made a report of child sexual abuse, during a child custody proceeding or at any other time, that he or she knew was false at the time it was made. Any limitation of custody or visitation, including an order for supervised visitation, pursuant to this subdivision, or any statute regarding the making of a false child abuse report, shall be imposed only after the court has determined that the limitation is necessary to protect the health, safety, and welfare of the child, and the court has considered the state's policy of assuring that children have frequent and continuing contact with both parents as declared in subdivision (b) of Section 3020."

"In making a determination of the best interests of the child in a proceeding described in Section 3021, the court shall, among any other factors it finds relevant, and consistent with Section 3020, consider all of the following:

Keys to winning a child custody case due to substance abuse

(b) In addition to the requirements of subdivision (b) of Section 765 of the Evidence Code, the court shall control the examination of a child witness so as to protect the best interests of the child.

(c) If the child is 14 years of age or older and wishes to address the court regarding custody or visitation, the child shall be permitted to do so, unless the court determines that doing so is not in the child's best interests. In that case, the court shall state its reasons for that finding on the record.

(d) Nothing in this section shall be interpreted to prevent a child who is less than 14 years of age from addressing the court regarding custody or visitation, if the court determines that is appropriate pursuant to the child's best interests.

(e) If the court precludes the calling of any child as a witness, the court shall provide alternative means of obtaining input from the child and other information regarding the child's preferences.

(g) Nothing in this section shall be construed to require the child to express to the court his or her preference or to provide other input regarding custody or visitation.

(h) The Judicial Council shall, no later than January 1, 2012, promulgate a rule of court establishing procedures for the examination of a child witness, and include guidelines on methods other than direct testimony for obtaining information or other input from the child regarding custody or visitation.

(i) The changes made to subdivisions (a) to (g), inclusive, by the act adding this subdivision shall become operative on January 1, 2012."

Additional reading on a child's preference

Ready to discuss and win your child custody case?

Our family law firm represents clients in each of the seven Southern California counties. We are experienced child custody attorneys. We know what it takes to prepare a case for victory. We know how to win inside of a courtroom. If you want an objective evaluation of your situation to determine if your position has merit, contact us for an affordable strategy session. We have offices in Orange County and Los Angeles.

Divorce with a Business Involved

How a Mother Can Lose a Custody Battle

OurFamilyWizard versus TalkingParents: Which App is Right for You?

Can a Parent Stop a Child From Seeing the Other Parent?