How is a Child's Preference and Choice in Custody Determined?

Does a child get to decide with what parent he or she lives?

How does a child's preference to live with a parent affect a child custody case?

A child's preference in custody includes the following:

A child's choice in California child custody cases has evolved

There was a time when a child's choice was a non-factor until the child reached his or her late teenage years.

However, child custody laws in California became more progressive. The legislature passed Family Code 3042 and its companion in California Rules of Court 5.250. Children then gained a voice to express their custody preference today unlike ever before.

In this article, we will discuss a child's preference in custody, how a child chooses with which parent to live and when the child can make such a choice. 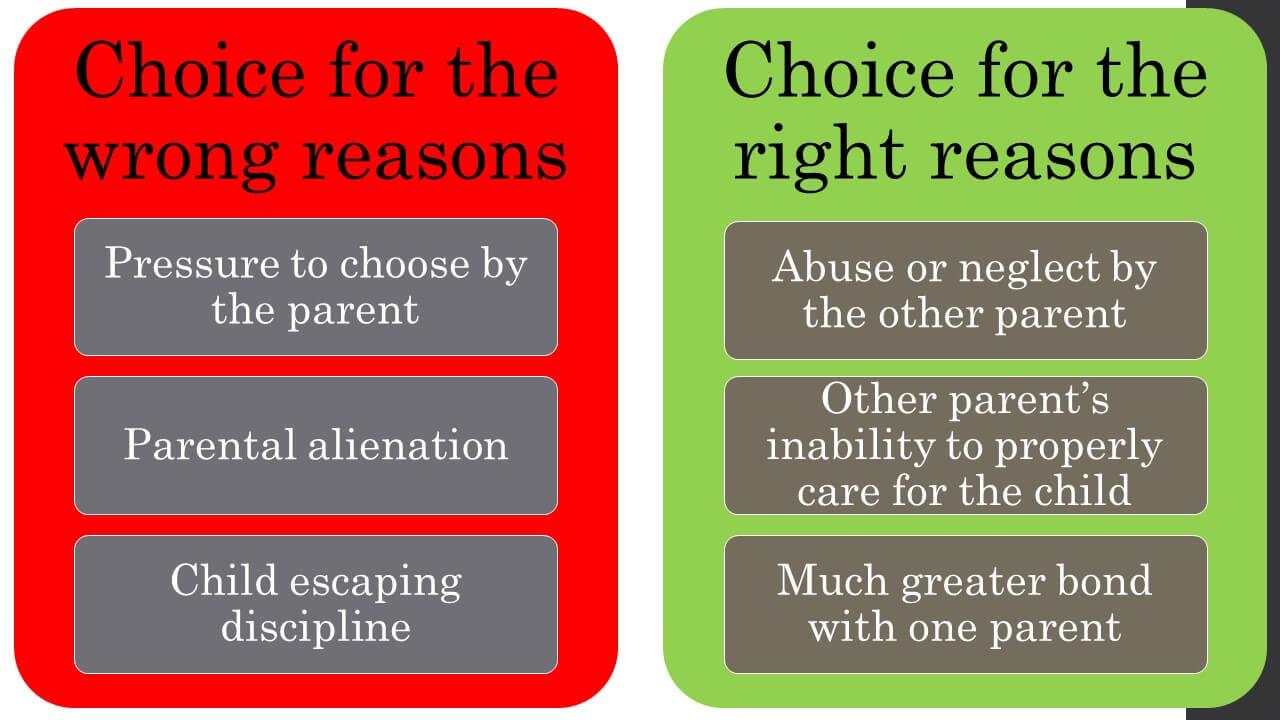 A child's preference in custody and Family Code 3042

(b) In addition to the requirements of subdivision (b) of Section 765 of the Evidence Code, the court shall control the examination of a child witness so as to protect the best interests of the child.

(c) If the child is 14 years of age or older and wishes to address the court regarding custody or visitation, the child shall be permitted to do so, unless the court determines that doing so is not in the child's best interests. In that case, the court shall state
its reasons for that finding on the record.

(d) Nothing in this section shall be interpreted to prevent a child who is less than 14 years of age from addressing the court regarding custody or visitation, if the court determines that is appropriate pursuant to the child's best interests."

A child's preference in custody for children age 14 and older

There is no magical significance to the age of 14. The California legislature believes the child has enough emotional maturity and capacity to reason and articulate relevant and appropriate reasons for a preference.

For those of you that have teenage children, this may surprise you. This is also the age children go through some emotional turmoil as they find their place in the world. It is not unusual for a child at this page to engage in rebellion. They may even use the "preference" option as a means to escape discipline. Before you fret too much, keep reading.

The court is not required to follow the child's preference if the court believes the choice is not sincere and a means to play one parent against the other.

Even in the context of a sincere choice and good reasons for a change, the court may not cut off all visitation even if the child requests it.

What if a child comes to court and states a preference to be in the sole custody of one parent and not see the other? The family court has wide discretion to still order visitation with the other parent. The family court can require court ordered counseling, reunification and other remedial measures to restore the relationship between the child and the parent the child no longer wishes to visit.

How does a child voice his or her choice?

Some family law judges choose a direct approach and hear from a child directly in chambers or in open court. In such situations, the Family Code and the California Rules of Court give the court the following options to consider:

Both Family Code 3042 and California Rules of Court 5.250 give the court many options to hear the child's preference in custody. These include:

The Court may also appoint minor's counsel, which is a lawyer for the child or children.

Regardless of the method the court chooses in the place of speaking with the child directly, the report back to the court must be:

The parent, through a delicate balancing of stating the child's preference in custody but not pressuring the child, must state to the family court the most important facts. These include the living arrangements between the parents and why it would be in the child's best interest to live with that parent, consistent with the child's wishes.

The experience of a child custody lawyer is very helpful here. It ensures the parent properly presents the information to the court through admissible evidence.

Our child custody lawyers have seen it firsthand in cases. We've had situations where a child has specifically expressed a preference to live with the other parent. However, upon our investigation and evaluation, we learned that the child's preference was the result of the emotional abuse, pressure or alienation.

All of these can factor into a child's choice. A vigilant parent must be careful not to simply let the child's preference be heard without knowing the real reasons for that preference in custody.

If your child states a preference in custody, what is your next step?

When is the Best Time to Get Divorced When You Have Kids?

How Do I Prepare for Child Custody Mediation?

Child Born Out of Wedlock and a Father's Rights

Reasons to Lose Custody of a Child That May Surprise You